We barely arrived in Greece before driving to the Halkadiki Peninsula to set sail around the Sithonian and Mt. Athos peninsulas. Some photos from our drive to Porto Corfu. 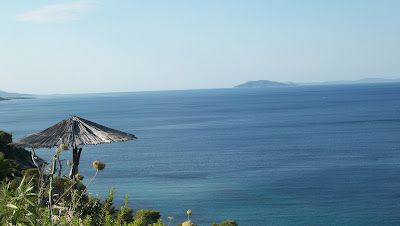 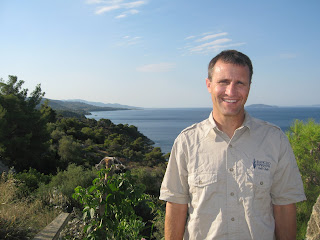 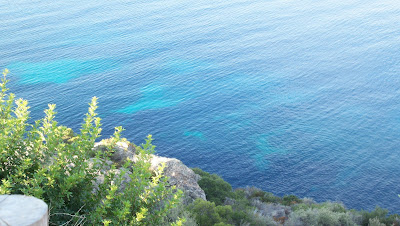 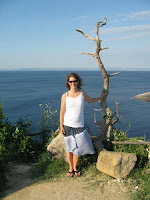 At beautiful Porto Corfu, Sithonian Peninsula, where we set sail. This was once a German submarine base. 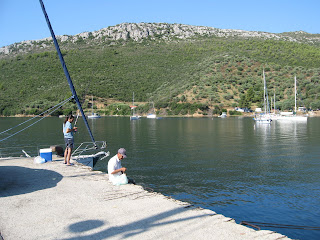 Loading gear onto the boat. Sailing was a little like camping, we packed in what we wanted to eat and drink. Except that sleeping on the boat was heavenly, I never slept so well!
This is the boat we sailed on:
http://www.sailyourmyth.gr/dufouren.html 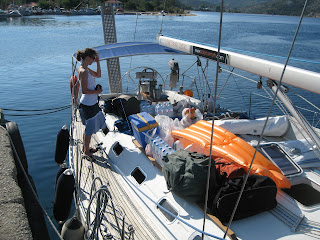 This is Yanni (far left) ~ owner and official captain. Tracy is steering us out of port. Tracy's mom, Georgia, is in the foreground. There were eight of us all together on this 45' yacht. 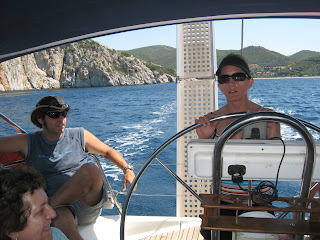 Heading out of the cove where we spent our first night. 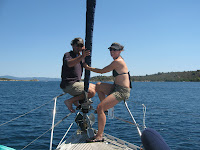 That is Mt. Athos in the background. 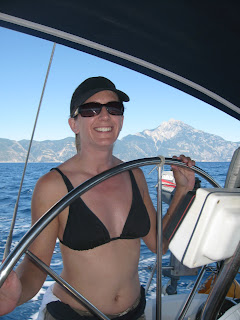 This is one of the monasteries on the Mt. Athos Peninsula. Mt. Athos is a semi autonomous republic of the Greek Orthodox church. The monasteries of Mt. Athos have preserved the largest collection of Christian art in the world: icons and treasure, Byzantine art, libraries replete with classical and medieval manuscripts. The first great monastery was established in 963 A.D. under the protection of the Byzantine emperors. At it's zenith, Mt. Athos had 40 monasteries and about 20,000 monks. Most of the monasteries are along the coastal lands, and we were impressed with their size and architecture, even from the distance. There are currently 17 of them including Russian, Bulgarian, and Serbian churches. Some have basic electricity but most function as they did in medieval times. 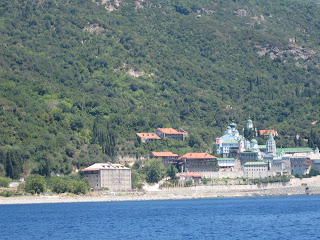 There is an olive grow on the far left side of the photo next to the monastery. Except for the small olive groves and vegetable gardens (the monks grow their own food), the whole peninsula is covered with dense vegetation which harbors many ecosystems. It was wonderful when a breeze would bring us the scent of pine trees from the land. 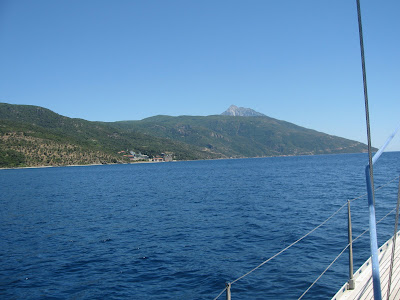 A distant view of Mt. Athos. I was astounded at how the monasteries were perched on the edges of cliffs and the dirt roads were etched into the mountainside. The white marble peak rises out of the sea at the end of a 30 mile long peninsula and is a very imposing 6,000 feet. It is so rugged and remote - and for nearly 10 centuries the fields have been ungrazed by cattle, the trees have escaped ravages by goats, and the flowers have been unpicked. I can't imagine the biodiversity on this peninsula, so insulated from the modern world. Only men are allowed permission to make a pilgrimage to Mt. Athos. 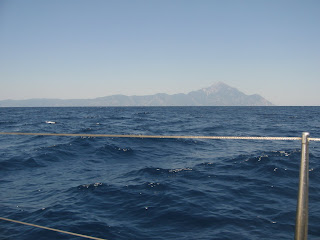 I tried to zoom in on a monastery with my point and shoot. We were prohibited from sailing within a certain distance from shore (since there were women on board). 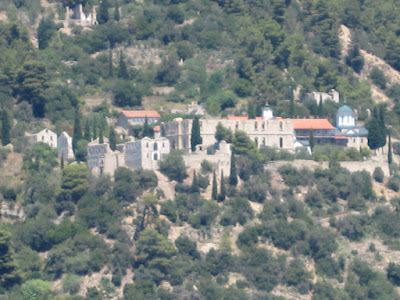 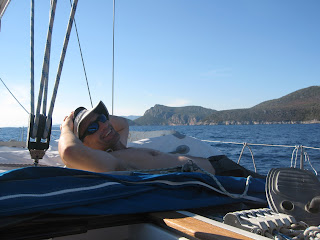 Much of the coastline was very rugged, interspersed with beautiful beaches and coves. There is a large number of endemic species relative to the size of Greece, due to the isolation of the numerous mountains and islands. 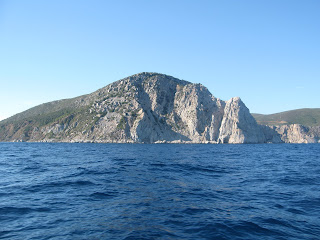 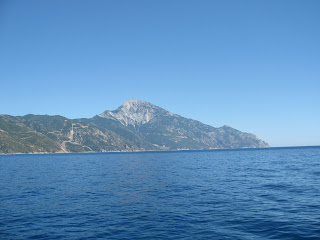 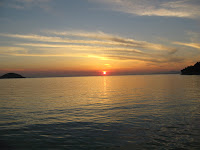 Love the sign on his boat - no high heels or work boots below? 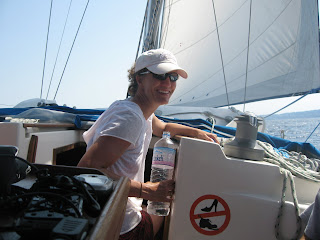 The little cove where we spent day 2 and day 3. The beaches are all public in Greece, and people are not allowed to build right on them, which is very nice. 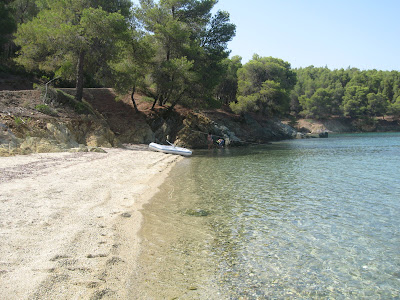 It's always happy hour somewhere on the planet! 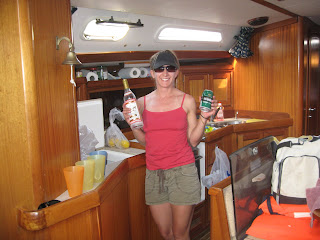 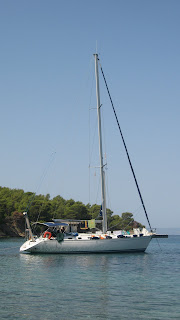 The water was truly beautiful. We snorkeled right off the boat but only saw a few small colorful fishes. There was also some sort of purple luminescent thingies, and a few sea urchins. 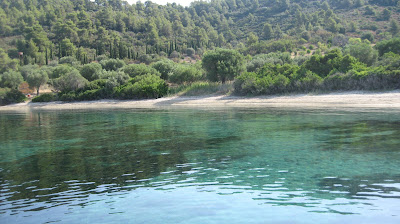 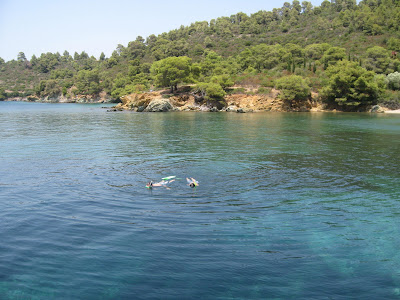 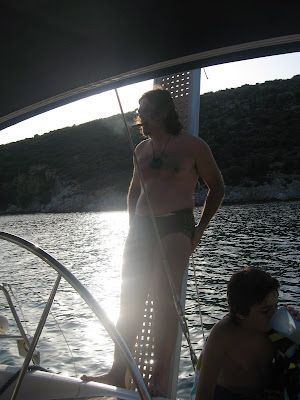 Happy is the man who before dying has the good fortune to travel the Aegean Sea. Nowhere else can one pass so easily from the reality to the dream. - Niko Kazantzakis 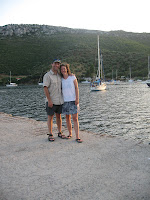 Posted by Kathy Browning at 6:34 PM