On Valentine's Day weekend we met my dad and his friend Sue at the Saratoga Inn . The Saratoga Inn has a wonderful hot springs pool and mini hot springs pools inside teepees. Our good friends Janet and Tim went, too, and we celebrated Janet's 60th birthday at the historic Wolf Hotel on Saturday night. Then they went out and partied, we can't keep up with them (okay - so our excuse is young children!)

This is the second time we've been to Saratoga for the cutter races. Cutter races are held all winter long at various places in Wyoming. The races feature two horses, a driver and a chariot (cutter) racing together down a quarter mile of track. For decades, the tradition of the cutter - or chariot - races have drawn spectators to Afton in Star Valley, as well as Jackson and Saratoga. Saratoga is the only place in the state that has a three-horse start.

In the section of the video where where the three horses start, there was a problem in the gate -- one of the middle horses put it's head over the gate. All went well in this case. They work really fast to get them in the gates and then release them before there's a real rodeo.

You can see one of the outriders (cowboys) to the right of the starting gates. The outriders are there in case there's a runaway chariot. On Sunday one of the drivers accidentally dropped her reins and the horses jumped the snowbank (throwing her off the back of the chariot in the process) and the team went careening through the parking area. Luckily no one was hurt. The outriders are there to catch the team if this happens and also to slow them down at the finish line.

They say it's the most exciting quarter mile of horse racing!

Video montage of our weekend, I have no idea why I picked the music I did --

Posted by Kathy Browning at 3:02 PM

I'm just too lazy to make my own post. Here's my good friend Shelli's link to our day in the mountains and our attempted ski to Louis Lake. Besides, Shelli's a professional so I leave the writing to her --

Skate Skiing in my Backyard 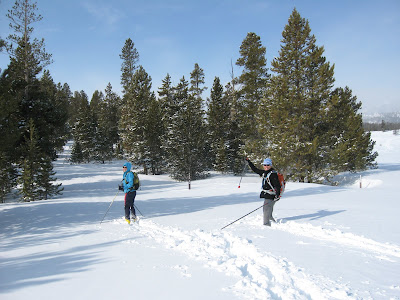 Holly and Shelli breaking trail - where are those snowmachines anyway!?

Another good day on the planet!

Posted by Kathy Browning at 2:43 PM