On our last day in Panama we did a partial transit of the canal.
Ben said it was his favorite part of the whole trip.  I gave him the camera for the day and he took literally hundreds of pictures, running from the bow to the stern to take every moment of the day in.  I have to admit, it was way cool. 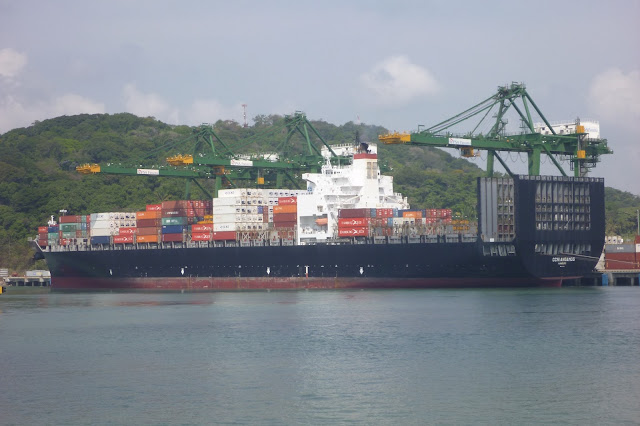 The big container ships getting off-loaded in the canal. Panama City has the second largest duty-free area in the world, second only to Hong Kong.

Our transit on the Pacific Queen went from the Pacific Ocean to Lake Gatun.  Lake Gatun was created between 1907 and 1913 by the building of the Gatun Dam across the Chagres River. At the time it was created, Gatun Lake was the largest man-made lake in the world, and the dam was the largest dam on earth.  Imagine, they used steam shovels for excavation!  If they built the canal today, with all of our technology, it would still be a marvel of engineering. 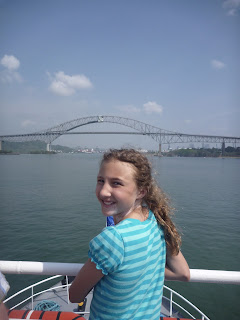 Laura as we approach the Bridge of the Americas. 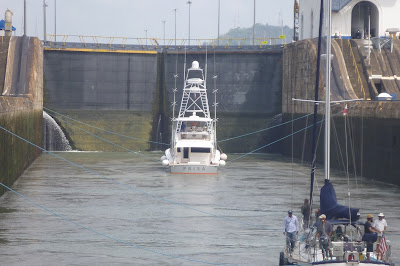 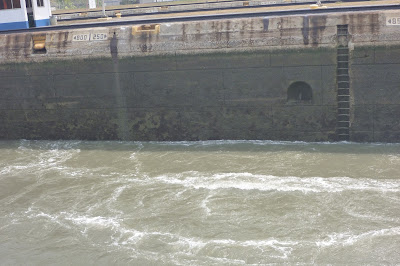 After the gates of the locks close behind the ships, the lock starts to fill.  It's a simple concept, like a bathtub filling up. 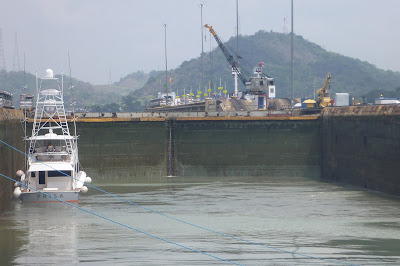 Here is the 'bathtub' about halfway full.
﻿ 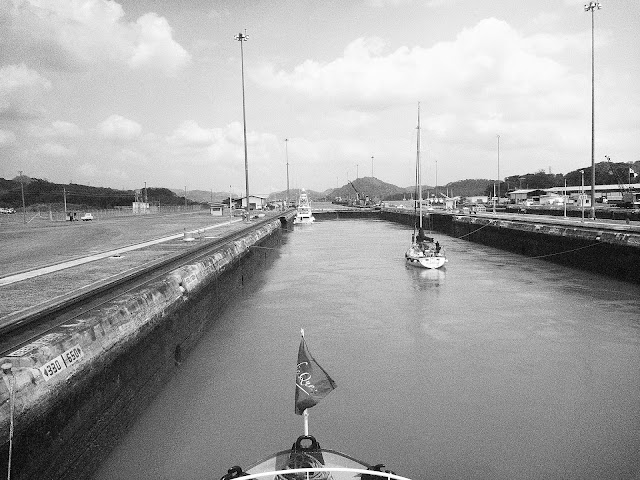 And here the lock is full, right before they opened the gates in front of us. 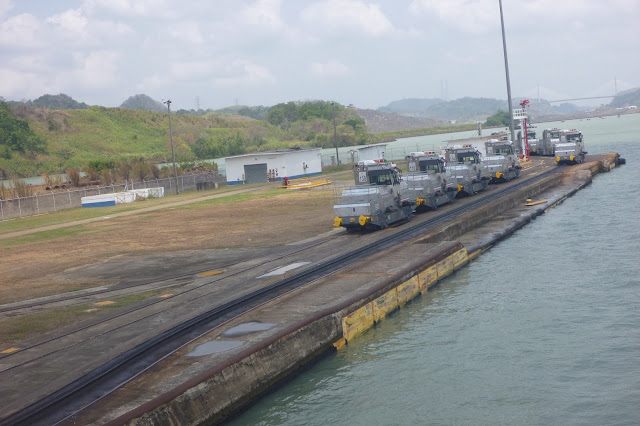 The rail cars that keep the boats in line as they navigate the locks.
﻿ 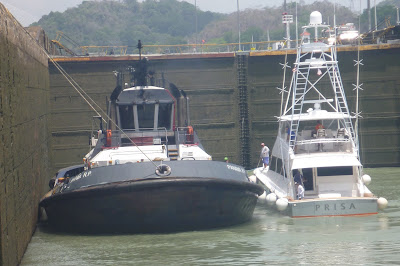 In this photo they've tied up the two boats together to keep them steady in the second lock. 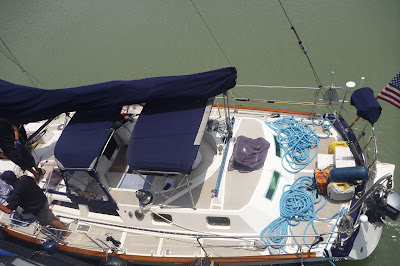 Here we are tied up to an American sailboat in the third lock.  I could have stepped off one of the decks of our ship right onto their boat, sigh. 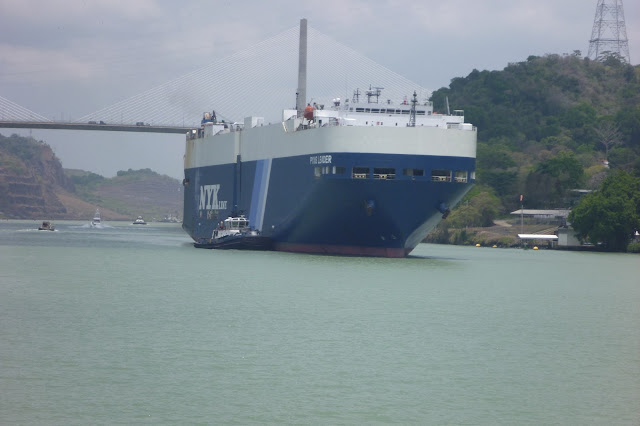 Check out the size of the tugboat compared to the ship.  This ship is not very big by today's standards.  There are many ships that are "PanaMax", or ships that are bigger than the canal can handle.  They are now constructing another channel next to the current channel to accommodate these behemoths.
﻿ 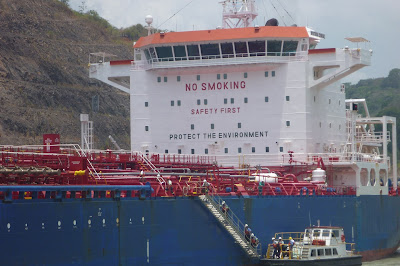 Note the "No Smoking, Safety First, Protect the Environment" signage on this tanker. 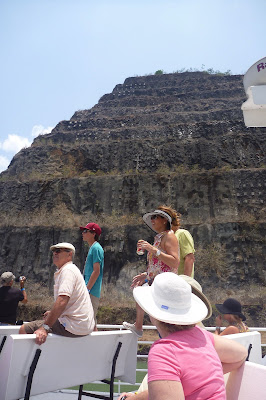 The above photos shows just a small portion of the Culebra Cut, where they literally had to blast through a mountain (the continental divide) to dig the canal.  The ships are being lifted, little by little, over a mountain range.  Amazing! 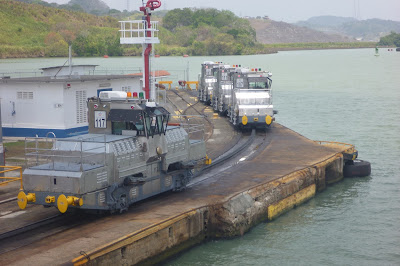 More of the rail cars, just because Ben took lots of pictures of them. 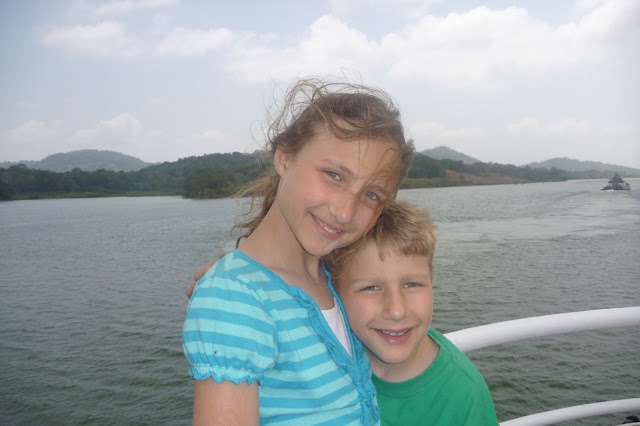 Laura and Ben in front of Lake Gatun.  There is an island in Lake Gatun called Barro Colorado which has been protected since the 1920s.  It's 3,800 acres of lowland tropical forest provides habitat for the island's 74 (and counting) bat species! The Smithsonian Institute has a research station there.  I would love to visit it someday.
The partial transit was not cheap (think skiing in Jackson for a day for a family of four) but it was well worth it as it was truly the experience of a lifetime. The story of the Panama Canal is fascinating - check it out:  American Experience - The Panama Canal

And that, my friends, is our story of Panama. 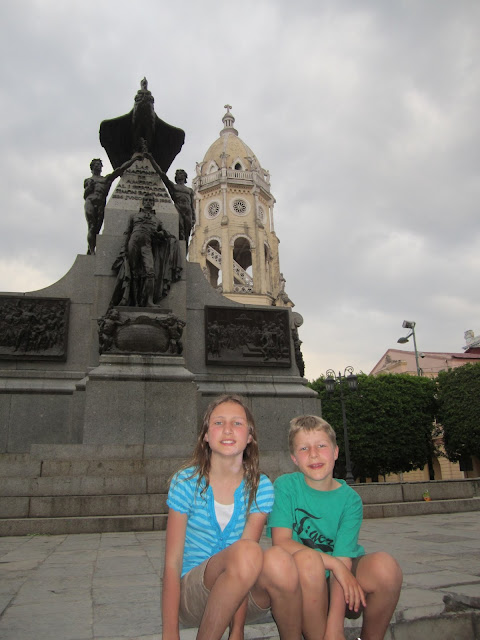 Last night in Panama in Casco Viejo where we ate a fabulous dinner followed by the best-ever ice-cream.

Posted by Kathy Browning at 4:21 PM