Los autobuses in Panama run all the time because everyone rides - not very many people own their own cars.  You only have to wait for about 20 minutes at any one stop for one to pick you up.  But it didn't take long for us to figure out that the buses will pick you up wherever you are if you stand in the road and flag them down.  The 'long-distance' buses that go from town to town are pretty nice and usually have air conditioning, similar to greyhound buses here.  The rural buses are small and crowded and are often full of kids coming from or going to school.  It was often standing-room only. We were the only gringos traveling by bus (except going to Santa Catalina) - but it's a cheap and efficient way to travel.  I had no idea (with my limited spanish) if I could get us from Santa Catalina to El Valle de Anton, with five bus changes, but it worked! The above picture shows the lonely bus stop we were dropped off at along the Pan American Highway en route to El Valle.  As luck would have it, we crossed the highway and there was a bus on the other side waiting to go to El Valle.  It worked like clockwork.  Amazing. 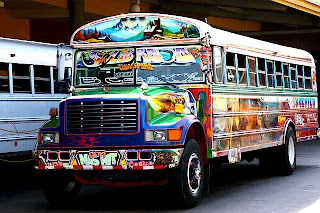 The bus pictured above is typical of the buses you see in the cities, called diablo rojos.  They are old American school buses painted crazy colors and lit up by equally crazy neon lights at night.  Each one of the buses is an original and the graffiti-style artwork is great.  You might see Jesus on the front of the bus and a pinup girl on the back.  Laura thinks that the Lander school buses should look like these.

The bus ride to El Valle was a bit nutty.  The roads were steep and windy as we climbed from sea level to the mountains. Plus the driver was texting every few seconds and talking on the phone.  He was also changing the radio station while holding his phone.  I don't know why he bothered because every station in Panama seems to play really bad rap music that all sounds the same.  When we got to El Valle we took a walk around town to find something to eat. 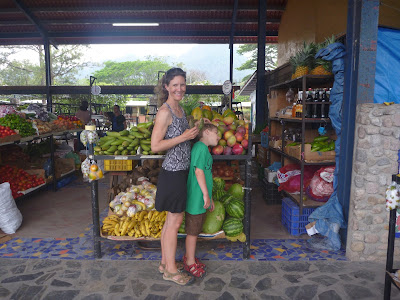 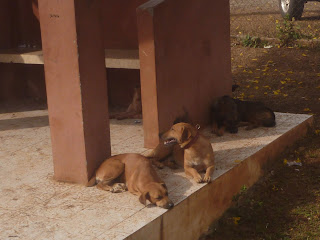 This was a seven-dog stop. For entertainment we often counted the number of dogs at each bus stop.

The picture below was taken during an evening walk and the light was so pretty as a storm was rolling in.  El Valle is fairly upscale - it's a small rural town where wealthy folks from Panama City come to escape the heat.  I liked that most of the fences in Panama are living fences. 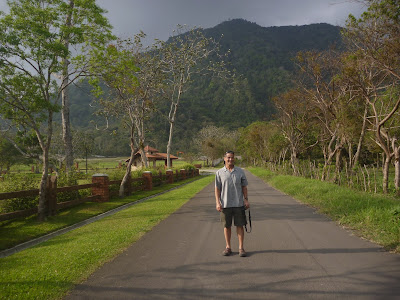 The kids are missing in the above photo because we left the kids to their own devices (i.e. watching Sponge Bob in Spanish in the hotel room) and took a walk on the outskirts of town.  It was beautiful in El Valle as much of the rainforest here is protected. 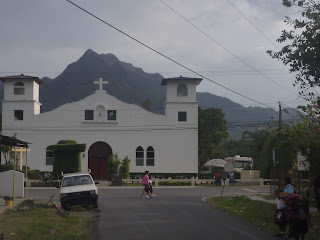 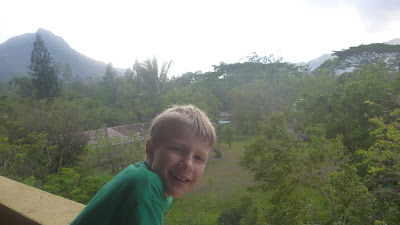 Ben on the rooftop with mountains around us. 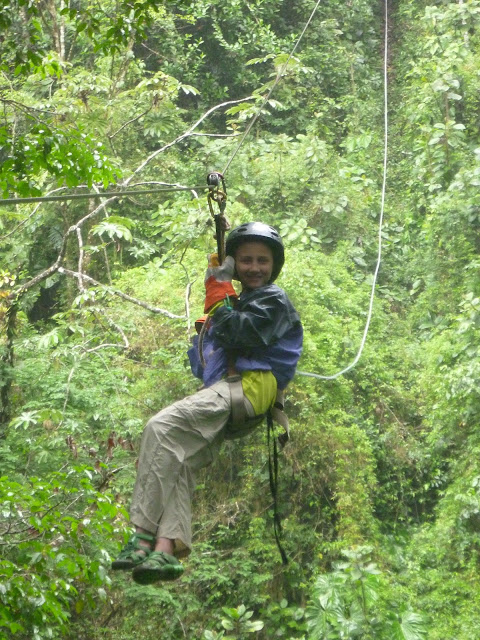 I'm a little embarrassed to admit it but the main reason we went to El Valle was to go zip lining.  It's one of the best bird watching places in Central America but we only had a little time for birds which I do regret.  I figured the kids deserved a special treat with the zipping. 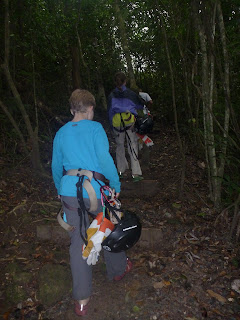 We hiked through a beautiful rainforest preserve for the zip lining and had a nice guide that took time to help us identify birds. 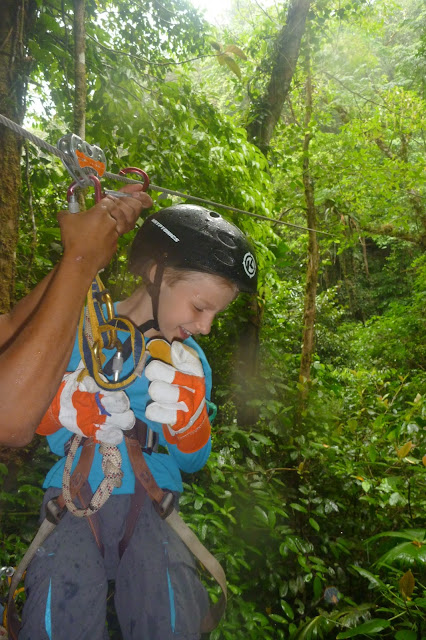 Ben has been wanting to do this for years, he was so excited! 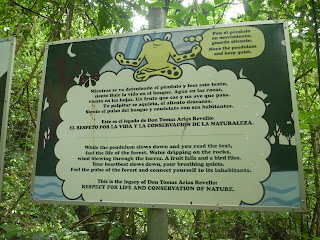 The rainforest preserve had the best interpretive signs.  Much more entertaining than the US Park Service!  The golden frog is an endangered species once endemic to El Valle.  We did not see one, except in meditation on this sign. 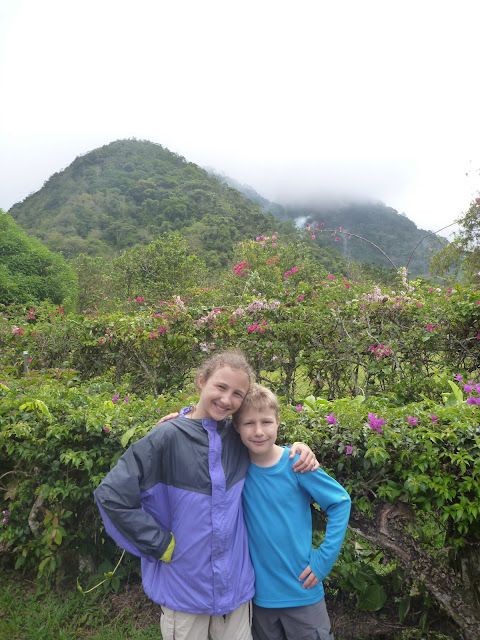 Mis hijos - walking back to town from the rainforest preserve.  Time slows down when you don't have your own transportation, and that's a good thing.  The flowers were beautiful and we saw some amazing birds (Panama has some 944 species of birds!) 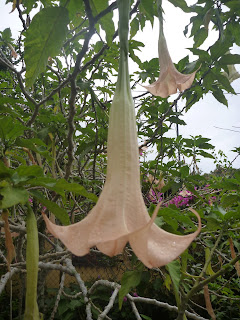 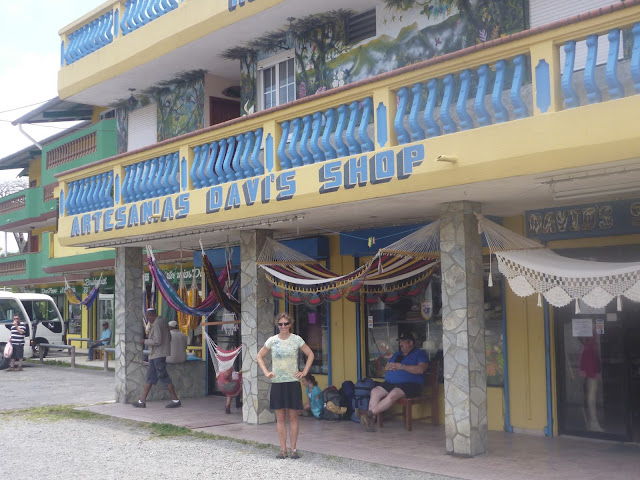 In front of our hotel which is above other stores and restaurants.  We had a pretty view of the surrounding mountains from the rooftop terrace. 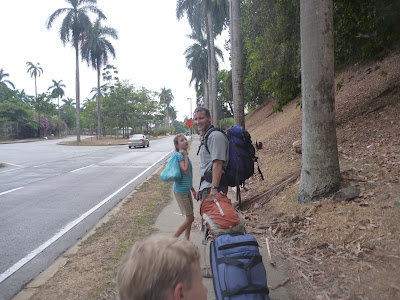 From El Valle we got on a bus to go to Panama City for our last two days in the country.  The funny thing was that in Panama City we asked the bus driver to drop us off at a certain pizza place near a highway underpass (we weren't even sure of the name of the pizza place).  The hotel owner in El Valle said it would get us within walking distance to our hotel in the city. 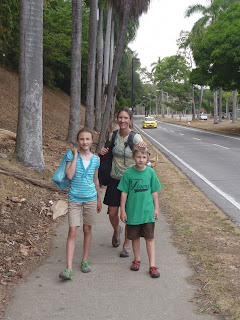 Yes, that is a taxi cab behind us.  Did we take it? Of course not... we were on a quest.  But taxi cabs were usually cheap if you asked before getting in ¿Cuánto cuesta? 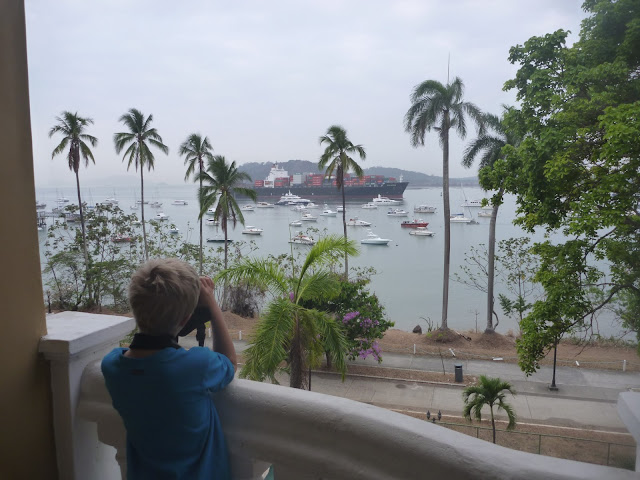 Wow, luxury digs in Panama!  From our humble beginnings at a hostel -- to a room with a spectacular view of Panama Bay and the canal.  But of course I'd take a hostel next to the surf and sand over an air-conditioned 5-star hotel any day!  I missed hearing the ocean at night...  But, watching the big cargo ships was way fun, as was the swimming pool. 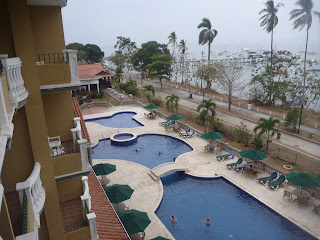 The kids were excited to play in the pool with two kids from Canada that were near their same age.  They invented a game where they threw mangoes at Panama beer cans on the bridge that went over the pool.   The height of culture for our trip.
Up next, our canal transit ~ sailing up and over the continental divide!﻿

Posted by Kathy Browning at 5:47 AM