This picture says it all. I can’t tell you the contentment I felt, dining street-side with my family in Granada, a Spanish colonial city in Nicaragua. We'd been in the country three days at this point but all of a sudden, sitting there talking and laughing with my family - I thought "we DID it!"  I’d always dreamt of taking my kids to far-flung locales and here we were – eating ‘strange’ food and staying out late. And the kids were HAPPY!
﻿
﻿It suprised me how much the kids took foriegn travel in stride.  But maybe, after all these years, we've toughened them up.  Take Laura, who at age 8, led a pack string (of exactly one horse) out of the Wind River Mountains on our backcountry trip.  And Ben ''climbed" his first mountain at age 4 in southern Colorado, with some help, of course. Both kids have engaged in any number of outdoor challenges on weekends and vacations:  nordic skiing, night time nordic skiing under the full moon in the middle of winter, snowshoeing, rock climbing, biathlon, horseback riding, tent camping in the cold/wind/snow/rain, and miles and miles of hiking in our beloved Wyoming mountains.


So I think maybe, just possibly, this was the easiest vacation they've ever had, although we didn't always have hot water, or any running water for that matter!

Do-over Scoop:
We spent one evening and one morning in Granada, which was plenty.  Out of 2 1/2 weeks in Nicaragua, this is probably the only thing I would really change.  In short, I would have only spent the evening in Granada, say from 3 or 4 in the afternoon onward and then leave in the morning.  We're not big city folk, or city folk, for that matter. Still, I felt that we should see the oldest city in the Americas.  And it was fun to just wander around, until the small people got hot and whiny.  Granada is easy for walking, and even at night you are safe if you stay within a certain radius of the city's center.


Granada was founded in 1524 at the edge of Lake Cocibolca (or Lake Nicaragua).  The Spanish colonial architecture was pretty and the town impressive with Mombacho Volcano looming in the distance.  Great for photography.


So, instead of spending a morning walking around Granada  (because we thought the kids needed 'down time'), I would instead kayak in Lake Nicaragua (there are freshwater sharks) or go back to Mombacho Volcano for ziplining.  Both doable with kids our age.  Hotel Terrasol can arrange either one for you and will try to get you the best deal.  You can be picked up for either right at the hotel, and Hotel Terrasol will store your luggage while you are out and about, if you are checking out to travel elsewhere.  We went from Granada to Laguna de Apoyo........ 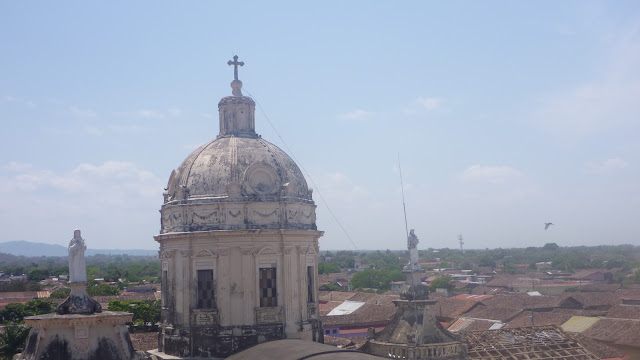 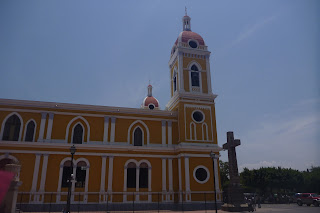 Ben pulled me by the hand into this church to watch the procession.  Certainly this had something to do with events leading up to Holy Week.  Ben is fascinated by religion.


Final note:
I'm going to come clean right now and say that on our very last night in Nicaragua (day 16 or something!), we got to our hotel so late that I [gasp!] ordered room service, which didn't cost more except for tip.