Disclaimer: I am in no way bashing cattle ranching or cows in this post.  Like anyone else in the West, I like a thick n juicy steak.  Also, apologies for the cuss words.  There is no other word for cow....pies.  Trust me.

I parked my truck at the junction of the county road and the nasty two-track that leads to the easement.  My plan was to ride my bike the five miles to the easement since there was no way that I could get there by truck, even in 4-wheel drive. We'd been doused with heavy rain for days and I didn't want to take any chances getting stuck. 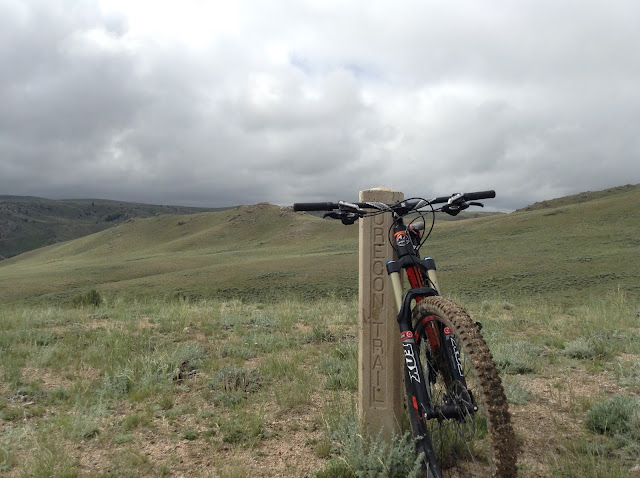 My route followed the Pony Express and Oregon Trails.


The sky hadn't cleared much from last night so I loaded only the essentials in my camelback for light and fast travel.  The road was beyond terrible - groups of cattle were congregated in the road and had turned the muddy sections into cowshit swamp-puddles.

The thing about fresh green cowshit is that when it dries it sticks to everything like cement - it's nearly impossible to spray off a bike frame.  And you can't get the smell out of your nose.

I went off-road through the sagebrush prairie to avoid the worst of it. But sometimes there was just no avoiding it because the prairie was just as wet as the road.


It didn't take long for me to get to my destination on the Sweetwater River - it's all downhill.  Much of the Sweetwater River in this area is part of a BLM Wilderness Study Area and it feels very remote and wild.   I've never seen another human out here in all my 12 years of visiting the place.

I did see herds of antelope and deer plus three cow elk.  The easement is at the mouth of the Sweetwater Canyon which provides severe winter relief range for elk.

I took the requisite photos for the easement visit and started the long slog uphill back to the truck.  As I rode the sky grew darker and more menacing.  I couldn't push myself to ride fast up the steep hills because of a chest cold.  I was about to cough up a lung.  I did the best I could - I have a healthy fear of lightening. Plus I needed to get the truck back on pavement while I still could. Even the county road would be impassable in heavy rain.
I had to cross a few miles of high exposed plains, which made me nervous. It's mostly flat so I rode as fast as I could, not bothering to dodge the muck anymore - just avoiding anything that would hopelessly suck my tires down.

As I crested the last hill I could see a herd of cows (plus one bull) standing in the road. Crap! (The word of the day.) There was a bull pawing at the ground and snorting at my approach.  I weighed my options.  I could make a long detour through a boggy meadow, or I could take a chance that he would move off the road.  He moved off so I crossed my fingers and rode past as fast as I could.

By now I was splattered from head to toe.  I could even feel globs of it in my hair - it somehow got through the vents in my bike helmet.  I was also chilled, dripping in sweat, and had cut my leg on something.  I should get hazard pay.

There's a moment in field work when you spot your truck and know that you're going to make it - despite the fact that you pushed the envelope and/or did something stupid.  And you thank the gods that you will see another day to do it all again. 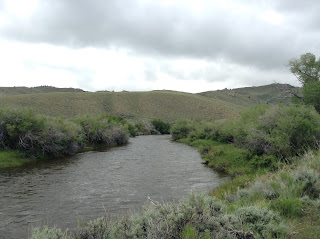