On Friendship - In Memory of Sharon 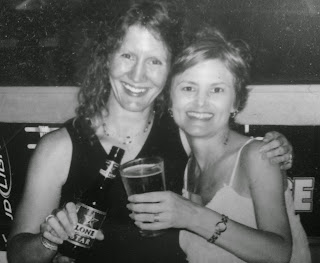 Today is my best friend, Sharon's, birthday.  She died on December 7, 2006 at the age of 37.  Sharon was my first and best friend all through grade school.  Sometimes I still talk to her in my head and can hear her voice.  It's hard to find the words but I've been meaning to write something in her honor for nine years now, and so here it is: 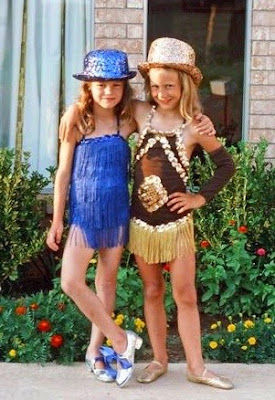 Sharon and I were inseparable.  When I look back at my old diaries nearly every entry reads, "Today Sharon and I...."  We slept over at each other's houses, went to the roller rink on Saturdays, the Swim and Racquet Club every day in the summer, and on Friday nights our two families went to Shakey's Pizza together.

We talked on the phone and wrote notes in class.  I had straight A's on my report cards except for "Conduct" where I usually received a 'C' for too much talking and giggling with my best friend.

We sang to Donny and Marie albums and played dress up with her dance clothes and my mom's prom dresses.  When we got older and our tastes were more refined (age 11) we listened to AC/DC and Foriegner.  She had these really cool platform shoes like Peter Kris from K.I.S.S.  We shoplifted some candy from the local convenience store (only once!) and played with matches in the alley.   Mostly we were so goofy I don't know how anyone could stand us. 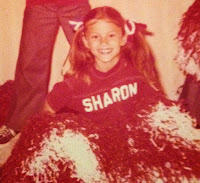 My dad was in the Air Force and at the end of my sixth grade year he received orders for a move to the Air Force Academy in Colorado Springs, Colorado.  I was devastated.  We'd lived in San Angelo, Texas since I was six years old.  In fact, I met Sharon just shortly after we'd moved to town.

When we left Texas, Sharon promised she would write to me.  And she did, nearly every week, for 25 years.

I saved most of those letters and every year I get them out and read some of them on her birthday.  Yesterday I realized that I was missing a span of about 5 years and searched the attic for them.  I never did find them but I found my 45's and roller skates, and decided to make some fun photos with them.

Over the years we each grew and evolved in different ways.  For awhile I felt like our friendship had waned, for the simple fact that we led such different lives and were bound to grow apart.  But we kept writing, and Sharon was always a better writer than I was - and I'm so thankful for that.

It took some major life events for me to truly appreciate the beauty and uniqueness of our friendship.  Sharon got cancer and I lost my first child, Anneliese.  It was at this juncture that we started to pick up the phone to call each other in addition to our letters.  It was awkward at first but it didn't take long at all to reconnect.

It was so great to hear her voice and her laughter, not to mention her Texas drawl.   We fell back into our old patterns of talking about, well, whatever!  I learned new things about her - like how she literally will not say anything bad about anyone.  And if she does, she says it in a funny and nice way.  How she is always positive and upbeat, even while battling cancer.   Thanksgiving 2006 she left a message on my answering machine, "I've really been feeling like C.R.A.P. lately."  You'd be hard-pressed to find a nicer person on the planet.  If I'd been through all the shit that she had, well, I'd be saying "shit."


Sharon had melanoma and also breast cancer, then her melanoma recurred.  It was so unfair.  She was a schoolteacher and her kids adored her.  She was smart, silly and fun and adored them back.  She had so much life left to live.

The last time I saw her was just a few months before she died.  I went to San Angelo for a weekend and we did some normal stuff - stayed up late talking and laughing, went out drinking beer (and to a dance club!), shopping, out to eat, and for drives around town.  I was so worried that I was tiring her out, but she said it was good to feel 'normal'.  We also did some not-so-normal stuff, like stay up late so she could take her chemo before bed.  We also had a talk about dying and this talk scared me.  I couldn't accept reality but I wanted to be there for her, to listen.  At that time I had hope and in fact, I was hopeful until the end.

Sharon was tough and courageous and never gave up.  She went through so much.  I think about that when I'm crabby for no good reason, how she always seemed to have a positive attitude.  Only once in a while would her letters reveal her fear and worry.  I'm honored that she shared that with me.


Having a best friend that knows your heart is a true treasure. Having a friend that has been there your whole life - from falling in love -- to heartbreak -- to grief, loss and sickness -- is a treasure a hundred times over.  Sharon was that friend.


I miss you Sharon and I'm still a dork. Sing along - READY - HERE WE GO - She was a fast machine, she kept her motor clean --

Even though I tried, I don't think anyone could say it better than one of Sharon's students: 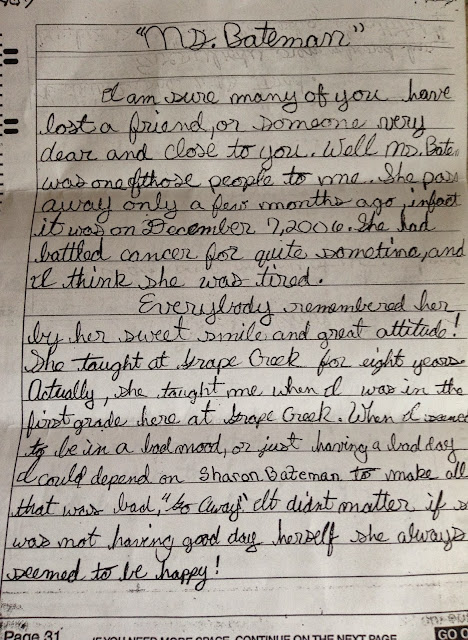 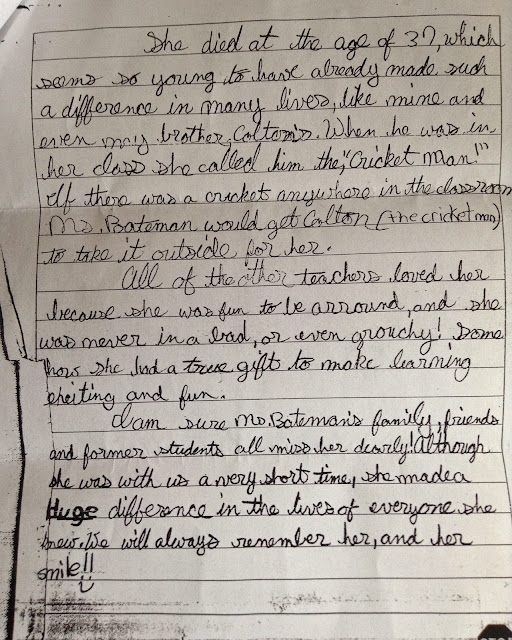 Posted by Kathy Browning at 6:32 PM