Fat Biking in the Wind and Staying Grounded

I really hate going to the gym to work out.  I'd rather go to the dentist than to the gym.  Also, I don't like the cold.  I was born on a July day in Tucson, Arizona when it was 115 degrees outside.  I'm a desert rat at heart. But still, I was jonesing to ride since we'd had two weeks of snow and sub zero temps.  So last Saturday with a break in the weather I rented a fat bike and headed out of town.


My first half mile was a hike-a-bike up a steep ravine.   There was an actual trail before a flash flood washed it away a few years ago and left a jumble of rock and scree.  The ravine was icy and I was slipping all over in my old pac boots trying to carry the beast. Once out of the ravine I was exposed to the beginnings of a stiff breeze.  But it's pretty up on the 'flats' where the trail winds through juniper and limber pine along a red rock rim. The only tracks I saw were those of deer, antelope and an occasional moose. 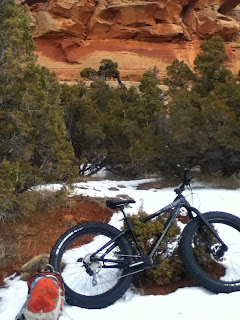 The wind picked up to 40-65 mph gusts which kept pitching me sideways into the sagebrush.  I couldn't stay on the trail. Fighting the wind was like trying to slay a dragon and I finally admitted defeat and turned around.

I was too annoyed with being tossed around so I walked the bike, which turned out to be ridiculously hard because I was caught in a crosswind.  I put the bike between me and the crosswind and then leaned my body weight on the bike to keep it grounded. But the wind kept changing directions and once it lifted the entire bike completely off the ground.  I was simultaneously cussing and laughing.  The tires were like balloons.  I needed a tether from me to the bike, like when you were a little kid and your mom tied a string from your wrist to your helium balloon. Or a surfboard leash thingie to my ankle.


﻿﻿﻿﻿My face hurt from tiny stinging bullets of blowing snow and my hair whipping it.  I was feeling sorry for myself that it wasn't a perfect bluebird day like yesterday - when I was stuck in the office.

﻿﻿﻿﻿﻿﻿﻿﻿﻿﻿﻿﻿The universe was laughing at me, except I don't know when to give up. Back at the truck I decided to I head toward the mountains for another ride, this one in Sink's Canyon. It was raining at the mouth of the canyon but slowed to a light drizzle at the trailhead.   Truly, rain on snow is just plain yucky but the trail was actually pretty fine. There was wind but once I got into the trees it was almost balmy.


﻿﻿﻿﻿﻿﻿﻿﻿﻿Then, ta-da! The sun came out and there was a beautiful filtered light through the pine trees. It was a nice reprieve before another squall moved in and the sun started to set below the canyon walls.  Despite the not-so-perfect weather, being on a bike is always better than being in the gym, or anywhere else for that matter.  There's something about biking in the winter that makes you feel like you got one over on the 'man.'  Then there's the beauty and quiet of the trails... and another season or riding. Hallelujah!﻿﻿﻿﻿﻿﻿