Dispatch from the Field - Rattlesnake Mountains 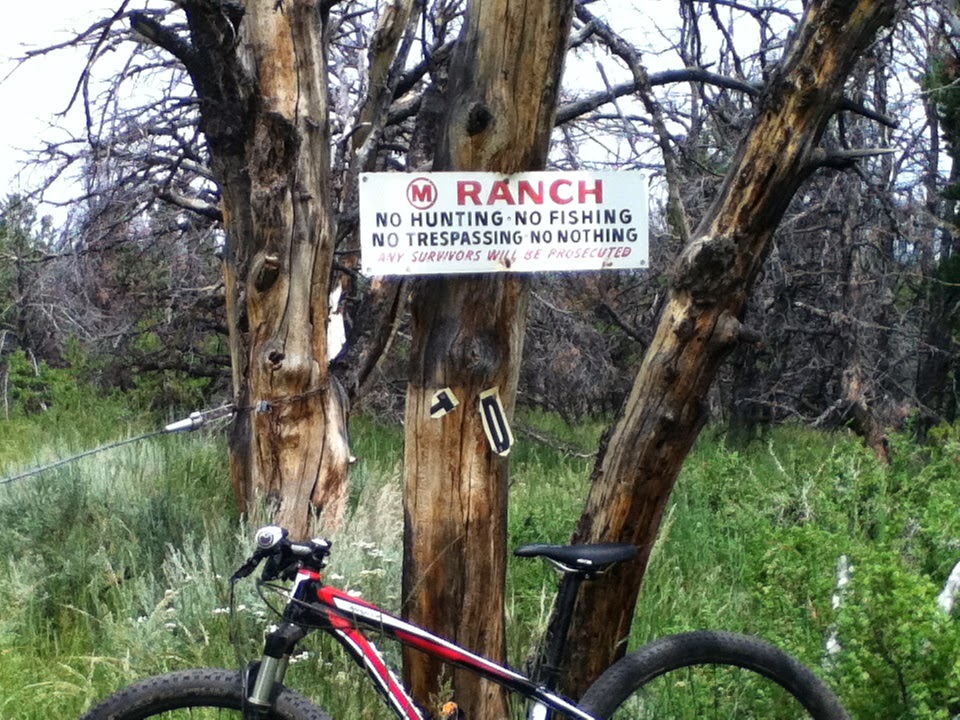 And there I was, on top of a mountain range in the middle of a thunder storm -- lifting my bike over my head and praying that I wouldn't be hit by lightening...

In my many years of field work I've been in a number of sticky situations. Hazards include rattlesnakes, grizzly bears, broken trucks, bad roads and foul weather.

Given all that, I have the best job. My summer consists of visiting about 20 ranches for field work that I do for The Nature Conservancy.  I love meeting with the ranchers and being out on the land.  The most remote ranch I visit is in the Rattlesnake Range, a mountain range smack dab in the middle of Wyoming, i.e. the middle of nowhere.

To get to the ranch you have to take a number of nasty two-track roads up to the top of the range.  The directions are so confusing that no one has ever bothered writing them down.   Now that we have GPS it's a little bit easier to find  - although the country is confusing and there's no good points of reference.

This particular area used to be part of a large ranch called the Matador but some of it has been subdivided and as a result there are a handful of cabins up in the hills.  Some are nice and some are downright scary and consist of little more than plywood shacks.  They bring to mind gun-toting anti-government-recluse-freeman types living in the hills.  A place I don't want to get lost.

The Rattlesnake Range is intriguing and unexpected - it rises straight out of the sagebrush prairie into red-rock faults, canyons, spring-fed creeks and high open valleys. Pronghorn antelope, mule deer, mountain lions,  elk, and any number of raptors call it home.  Because of its remoteness it feels wild and intimidating but it's also beautiful.  It has a strange feel about it, like you'd imagine the vibe within the Bermuda Triangle.

I always try to get out early in the day to avoid afternoon thunderstorms.  Naturally on this trip I was running late and then took a wrong turn.  Once I got to the ranch gate it was locked, double-locked in fact.  The landowners were not home for my visit.

At the gate I ate a quick lunch on the hood of the truck before setting off on my mountain bike.  I'd been packing my bike for situations like these, where it would take a long time to walk in and the roads are often too rough for a vehicle.

The country was so lush, it seemed like there were thousands of butterflies this year with the abundance of wildflowers. My goal was to get to a high spot on the ranch to take photos and it wasn't until I was up there that I could see a wall of blackness closing in.


I was in a race to beat the storm and I rode back to the truck as fast as I could, but it was dicey.  The two-tracks are deeply rutted and I couldn't see the ruts because the grass was so thick and high. I took one spill over the handlebars and scratched my bike frame. That nearly made me cranky (the scratch not the spill).

The roads through the wet meadows were completely grown over so I put up cairns on the way in to mark the turns from one two-track to another.  (I was glad I took the time to do this, it would be no fun getting lost on the way out.)

I was riding through bogs in wide-open meadows when the storm broke.

﻿﻿
﻿
I debated whether or not to hunker down and wait for the storm to pass.  But if I waited then the rain would make the roads impassable.  I wouldn't be able to get off the mountain.

It was a catch-22 so I said a prayer and high-tailed it across the open country, hoping that lightening wouldn't strike me whenever I had to hoist my bike above my head and over a barbed-wire fence.

I arrived at the truck soaking wet.  I was feeling panicky about the road conditions but I also felt like it had been dry enough in the last few days that they wouldn't turn to mush too quickly....

No such luck -- the roads were complete snot. I slid sideways down the mountain for a good hour.  It was a rodeo and I did all I could to keep from getting stuck or sliding off the road into the borrow ditch.

Whenever I started to panic I did what I recently learned from my mountain bike coach.  "When things start to go to hell, stop and take a deep breath and start again."  Sometimes I couldn't stop and had to gun the thing but mostly this worked. It's been awhile since I'd been on roads this bad. Amazingly -- I had radio reception and sang out of tune classic country all the way down the mountain.

"She's a good hearted woman in love with a two-timing man."  It was a goofy scenario all around.

To add insult to injury I had to open a number of gates in the pouring rain.  Cattle congregate around the gates so wherever I got out I was deep in a quagmire of cow shit and mud.   I deal a lot in cow and horse poop which doesn't usually bother me.... but this was really... yuck.

Finally I made it to Poison Spider Road, a very nice graveled road and about two hours after that I was home in Lander.  It took me 45 minutes just to wash the mud and @#!* out of the wheel wells.

What's that saying about fishing?  A bad day of fishing is better than a good day in the office.  Same with field work, but then again, all's end that ends well...

Posted by Kathy Browning at 3:31 PM